Summarizing 2014
2014 was a year of mixed emotions for Indian Aviation. The industry returned to growth after a brief hiatus post the fall of Kingfisher Airlines and in the latter half of the year saw reduction in prices of Aviation Turbine Fuel (ATF) on global cues.

With this came the unprecedented but widely forecasted crisis at Spicejet, after few steady months. The year which started on a good note for Spicejet, having performed better than IndiGo in its much touted On Time Performance (OTP) ended with one of the worst performances on the same parameter for the airline, recording a low of 47% on time departures at Delhi in December’14.

Go Air, launched a new station – Bhubaneshwar and deferred delivery of its 20th aircraft, Air Asia had muted performance with expansion nowhere close to what was being discussed and published.

Jet Airways was resurgent with funding from Abu Dhabi’s Etihad and subsequent changes, while only other Full Service carrier Air India had its own share of problems with the technical glitches on the Dreamliner’s and engineering issues on the Narrow bodies yet made it to Star Alliance.

Well, that leaves us with IndiGo – which continued to expand with more flights between metros and launching flights to few more domestic and international destinations. The airline also, for the first time decided to induct aircraft available in open market as a stop gap arrangement till the A320 NEO are inducted.

IndiGo continued to be a market leader, closing the year with a market share of 31.8% followed by Jet Airways and its subsidiary Jetlite at 21.7%. National carrier Air India garnered 18.4% while Spicejet cornered 17.4%. Go Air failed to breach the double digit mark and ended the year at 9.2% with Air Costa and Air Asia closing at insignificant 0.9% and 0.5% respectively.

2015 begins
Passengers grew 21.33% MoM in January 2015, an indication of return of good times and assertion that growth in capacity is followed by growth in passenger numbers. 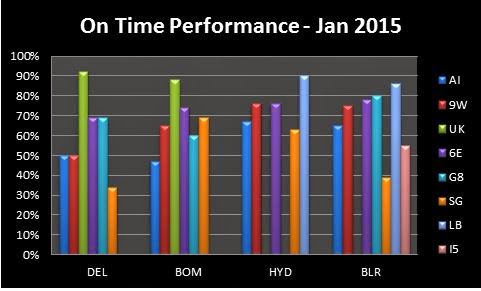 The year started with news of change in ownership at Spicejet and launch of Vistara. Both will have an impact on the market in these 12 months of 2015. However, at the end of January, Spicejet was still struggling to get its act in order with an On Time Performance (OTP) of just 34% at Delhi in January. Indeed most of it was affected by fog, but it wasn’t fog alone which led to this performance. 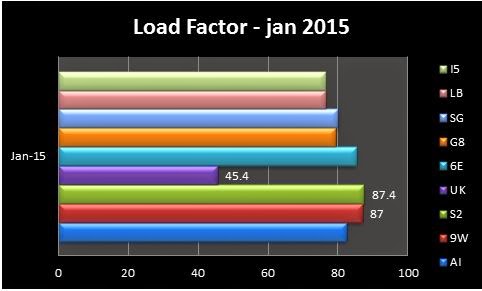 The OTP remained an issue for all airports across the country due to the fog in North & East India which was around for a prolonged period than yesteryears. Normally unaffected stations also saw fog this year which compounded the problem. 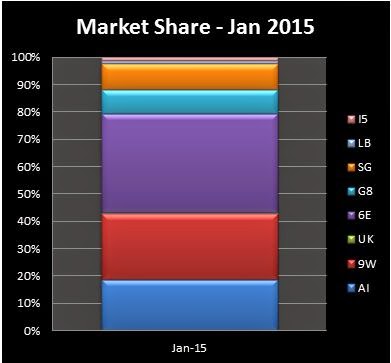 January 2015 saw a total of 62.45 lakh passengers taking to the skies, with the month clocking marginally lower Load Factors than December 2014.

Jet Airways clocked the maximum load factors of 87.4 percent for flights operated under Jetlite code (S2) and 87 percent for those operated under Jet Airways (9W), while the lowest load factors were clocked by new comer Vistara which recorded 45.4 percent. Vistara did not have complete month of operations and this was its first month, thus this is too early to judge the performance.

Spicejet saw maximum cancellations and also maximum complaints – a trend that should reverse very soon as funding is tied up and operations are back to normal.

Go Air has seen its market share slip from over 10% which it achieved twice last year to less than 9% now. With no addition to capacity, the airline will find it tough to hold on to the market share. However, the airline continues to have some monopoly or duopoly routes which the competition is not after. This is either due to slot constraints at Mumbai or the leaders fighting it out with the newbies in the market.

Challenges Ahead
2015 will be a challenging year, Vistara would be flush with funds to expand and Air Asia would be hoping to get back on track with newer routes, planes and a massive expansion if they have to sustain. So far it looks like IndiGo has been able to contain them and made them re-think on the plans they had. Jet Airways will continue its expansion to its middle eastern hub of Abu Dhabi with flights from Ahmedabad and Pune on agenda effective March. This year will also give us an answer on the European hub strategy of Jet Airways.  Spicejet will get its strategy in place with respect to Q400 and B737 and will have another “NEW” network this year.

If all goes well, by year end IndiGo may receive the all new A320 NEO. Spicejet would hope to stabilize the network and operations in first half of the year and take a decision on the Q400s by mid-year. Go Air could well be the next airline to start international operations, most likely a short hop from Mumbai or Delhi.

Lastly, the government will have to get its house in order and iron out differences on the revised Route Dispersal Guidelines and revise the 5/20 rule at the earliest. The battle for Noida airport will increase from here on and so would this be a critical year for Navi Mumbai. Any delay now, will mean the airport opening certainly gets pushed post next general elections

I can only hope for a great 2015 for Indian Aviation !